Roughing It The Civilized Way

Posted by Voyageur Quest on August 11, 2001 | Featured
Roughing It The Civilized Way Gordon Garrison Voyageur Quest’s tour of Algonquin Provincial Park in Ontario lets visitors meet nature up close and personal, but smoothes the rough edges with a comfortable base camp. We were a diverse group, and none of us knew exactly what to expect. The idea of ‘getting away from it all’ motivated some, curiosity others. We were from Italy, Switzerland, Ireland, England and Canada, and we had all gathered for a Voyageur Quest, an outdoors experience in the remote northwest corner of Ontario’s Algonquin Provincial Park. Here, ‘voyageur’ related to the wilderness aspect of the exercise; the ‘quest’ was for knowledge. John Langford, company president, was enthusiastic about the area. On his canoe trips, he told us, he had encountered bear, moose and wolves. Seeking to promote outdoor activities in the region, Langford set up a company that supplied everything from sleeping bags to guides. After seven successful years with this rough-it venture in the forests and lakes, Langford decided to smooth some of the rough edges, to encourage more visitors. He constructed a rustic, six-bedroom lodge using red pine, hewn from the area. A lounge area and dining room wrap around a huge stone fireplace, and there is a small library. A smaller building contains hot showers and a sauna, heated by a wood-burning stove. Communication with the outside world was handled by a cell phone. Meals, when not cooked over a campfire, were prepared in the lodge’s kitchen, on an ancient gas range. Electric lights, powered by a propane generator, were turned off at bedtime. Arriving at an Algonquin Park ranger station, my son and I were met by some of the guides who would be our group’s trail masters, educators, cooks, canoe captains and fast friends for the next three days. Jennifer introduced us to Oliver, a young student knowledgeable in the arts, born in Quebec but reared in Guadeloupe. We headed into the woods, following a trail that only Oliver could find. For 2 ½ hours he directed our attention to hemlock, maple, red pine, tamarack, wild flowers and grasses. Oliver pointed out a beaver dam, long abandoned, some fresh moose tracks and bear droppings. The only wildlife we came across were a water snake and some frogs. Our trail ended at Smyth Lake, where we were met by our third guide, Trent. By himself, Trent had paddled across from the lodge in a 26-passenger canoe. My son and I, and Swiss travel mates Yogi and Antoinette, helped paddle back. Entering the lodge, we met seven other adventure seekers, completing the roster of guests. We ranged in age from the mid-20’s to mid-70s. Our occupations included airline pilot, graphic designer, dental technician and forensics specialist. At the lodge, people were busy surveying maps and becoming acquainted with each other. After dinner, Trent drove four of us to the end of a dirt track a few miles from the cabin. The night was perfectly calm, not a ripple on the roadside pond, which reflected a cloudless sky, dotted with a million stars shining brighter than imaginable. We spoke in whispers, if we spoke at all. Trent broke the silence by teaching us to howl like a wolf. One person would howl once, wait 30 seconds, howl again, wait another half minute, than all five of us would howl. I failed miserable, but Antoinette was great. Unfortunately, the wolves were not answering this evening, although Trent assured us that sometimes the real animals did return the howl. Following a full breakfast, Jennifer took us on another hike in the woods ‘ an ‘edibles’ hike. She pointed out which mushrooms were safe to eat and picked various leaves, such as wintergreen, for us to taste. We tried a dot of sap used by generations of native people as a stomach remedy. Jennifer identified ferns, including the only edible one, the ostrich fern, and noted the various berries: black, blue, rasp, bunch and chokecherries. She showed us a carnivorous plant and gave us some lessons in survival practices. A flotilla of canoes set out in late afternoon, crossing the lake. There, some gathered kindling; others helped Jennifer lug food chests to a campfire pit. As the sun set gloriously, kebabs were arranged on a grill over the fire. Jennifer stirred flour, baking powder, cinnamon, water and milk powder into a sponge-like mixture that we wrapped around the tips of twigs and roasted over the fire. We were baking bannock, unleavened bread. And yes, for dessert, we toasted marshmallows. Next morning, we were awakened at 5. We boarded our canoes and headed into the mist. Again we were speaking in whispers. Loons, birds that are so much an emblem of Ontario’s wilderness, made their laughing call, which echoed around us. We made landfall at what would be our breakfast site. Again the search for kindling, another fire, another photo opportunity as the mist was burning off in the morning sun. Jennifer cooked blueberry pancakes and bacon, served with real maple syrup, cantaloupe and coffee. It was a most civilized start to another day in the woods. 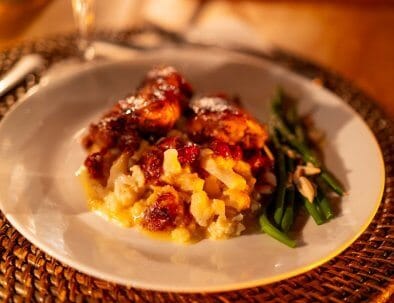 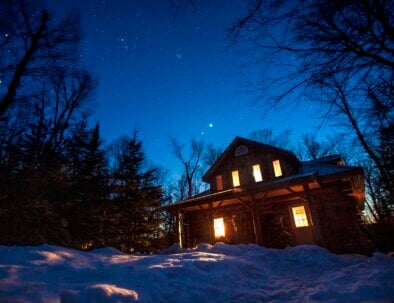 December 31, 2022- Jan 2, 2023 Get festive and bring in the New Year with an escape to the winter wonderland ! Feast on meals served in front of the stone fireplace. Snowshoe, ski and sauna. An unforgettable New Years in the wilderness. 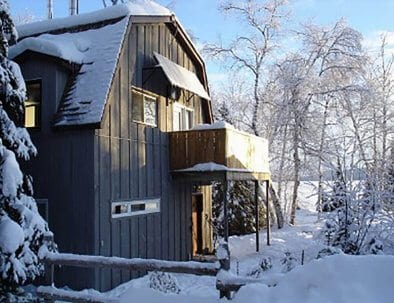 Dec 27 - 30, 2022 Bring your large family and friends for some winter fun ! Relax in a comfortable chalet and snowshoe and ski from your door! With 6 bedrooms , 3 washrooms- perfect for up to 12people.