Northern Exposure Century Home Magazine Port Hope, Ontario, Canada – Winter 2002 A cabin in the woods and a dogsledding adventure makes a perfect country getaway. Some Canadians have a grudging acceptance of winter and will sigh by the window, watching the now collect outside. Others run outside and revel in the fresh white blanket and the crisp, clean air. For the latter group, a country adventure joining a dogsled team for a day is the ultimate way to celebrate winter. More than just a tourist activity, dogsledding is one of Canada?s oldest sports ? becoming official in 1908 in the Yukon. Says Geoff Wells of Kingston, Ontario, ?It?s an adventure off the beaten path.? Better still, a dogsled adventure has even more appeal when it?s based out of a traditional log cabin in Algonquin Park, Ontario. When we arrive at the cabin, the waist-deep snow is so white it?s blinding. We?re ushered inside by Graeme and Brian, two of the guides who work for the adventure travel company Voyageur Quest. Lunch ? a zesty bowl of butternut squash soup with thick slices of maple syrup-crusted beer bread for dipping ? is definitely inspired by the rustic surroundings. The cabin was hand-built in 1997 using mostly red pine. Despite the fact that the building is relatively new, it still manages to convey an age-old feeling of comfort. An impressive stone fireplace commands the center of the living room, surrounded by comfortable couches and chairs. A window seat, covered in wool blankets and pillows, looks out to spectacular forest vies. Other than the sound of baying dogs, there is little noise ? no blaring television, no traffic. This is a Thoreau-style cabin in the woods ? there is no electricity, and no telephone. Getting into the spirit of things, we head out on a moonlit walk to hear the howling of wolves. Algonquin Park is world renowned for its concentration of timber wolves. Graeme explains that wolves use howls for long distance communication, and to warn those from other packs that an area is occupied. We?re all silent as the guide stops in a clearing, cups his hands to his mouth and lets out a strained howl. We wait for the response. Nothing. Again, filling his lungs with air, he howls. Still no response. He recruits me and we howl in unison. The wolves ignore us. The following morning is bright and clear. We head over to visit the 251 Alaskan sled dogs ? cross-bred, carefully trained huskies as individual in looks and personality as humans ? contained in a space the size of a football field. Sled dogs are pack animals, and run in teams. The group of dogs chosen is a team of seven ? one lead dog who listens to the musher?s orders, and three pairs of dogs following. Even for the neophyte, dogsledding commands are very simple. ?Gee? to turn right, and ?Haw? for left. ?Whoa? means stop, combined with heavy pressure on a hand brake. The dogs run about 30 kilometres an hour, weaving in and out of trails carved in the dense Algonquin Park forest. Wells, who rode in the sled, advises, ?Just hang onto the handrails and go!? It?s difficult to leave the dogs and the log cabin after spending two days in the country wilderness. But there?s also something appealing about getting into a heated mechanical sled ? your car ? and driving home. Just remember to howl once before you leave the park. 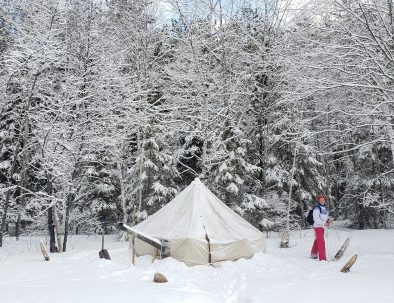 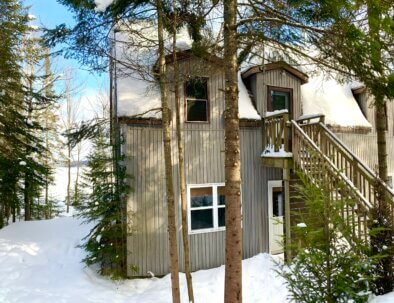 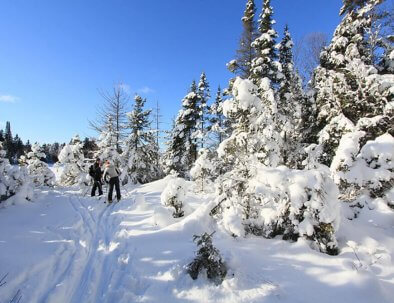